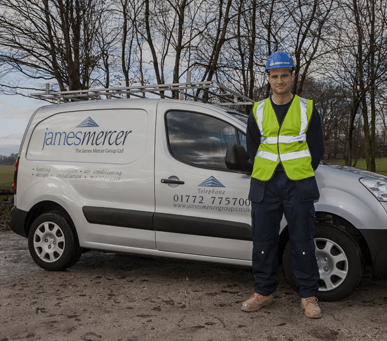 Jim had learnt his trade whilst working for Dilworth & Carr and decided to set up his own business. He established his Company in premises known as Canal Bridge Works in Preston. In the days of solid fuel boilers and cast iron pipework with caulked joints his men carried the equipment by hand cart or by public transport for more distant jobs.

It was common for men to lodge away from home even a few miles from Preston and return home every two weeks. The Company was incorporated in 1941 and Jim’s son, also called Jim, joined the business. Sadly Jim junior died during his father’s working life and so Tom Moxham who worked for the Company was invited to become a director. In 1955 Dick Hayes and Jim Curran joined the Company.

In order to secure work in the Merseyside area a branch office was opened in Liverpool in 1957, and due to a compulsory purchase order for Canal Bridge Works alternative premises were needed and the Company relocated to Tulketh Hall Works in Hesketh Street in Preston.

Tom Moxham and Jim Curran died in 1962 and 1966 respectively and with the majority of the shareholding being in these families a caretaker management team administered the business. The second generation of the Moxham and Curran families joined the Company in 1964 and 1965, and John Moxham was appointed Managing Director in 1981. 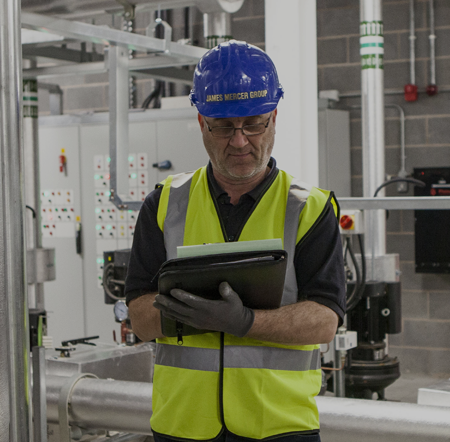 Whilst the Company had always carried out some Service and Maintenance work a decision was taken in 1991 to develop this sector and now the department employs 44 mobile service engineers. In 1998 a department was set up to install and service comfort cooling systems. The Company had traditionally sub-let this work but it was felt that an improved overall service could be provided to our clientele by having this facility in-house. In 2003 a dedicated Plumbing department was created. Due to an increasing trend for main contractors wishing to place one order for all aspects of building services it was felt that advantages could be gained by offering this facility.

Paul Catterall and Stephen Potter were appointed to the Board of Directors in 1997 followed by Jenny Mayor who joined in 2000.

In 2000 a restructuring of the Company took place and a new Company was established in the name of The James Mercer Group Ltd, with all the equity being held by the Moxham family. Also in 2000 the third generation of the Moxham family namely Andrew joined the Company and was subsequently appointed to the board of directors in 2006. Paul Moxham joined the company in 2007 and has responsibility for Health and Safety, Quality Assurance, Environmental and Logistics.

Advertising Agency Preston
We use cookies on our website to give you the most relevant experience by remembering your preferences and repeat visits. By clicking “Accept All”, you consent to the use of ALL the cookies. However, you may visit "Cookie Settings" to provide a controlled consent.
Cookie SettingsAccept All
Manage consent

This website uses cookies to improve your experience while you navigate through the website. Out of these, the cookies that are categorized as necessary are stored on your browser as they are essential for the working of basic functionalities of the website. We also use third-party cookies that help us analyze and understand how you use this website. These cookies will be stored in your browser only with your consent. You also have the option to opt-out of these cookies. But opting out of some of these cookies may affect your browsing experience.
Necessary Always Enabled
Necessary cookies are absolutely essential for the website to function properly. These cookies ensure basic functionalities and security features of the website, anonymously.
Functional
Functional cookies help to perform certain functionalities like sharing the content of the website on social media platforms, collect feedbacks, and other third-party features.
Performance
Performance cookies are used to understand and analyze the key performance indexes of the website which helps in delivering a better user experience for the visitors.
Analytics
Analytical cookies are used to understand how visitors interact with the website. These cookies help provide information on metrics the number of visitors, bounce rate, traffic source, etc.
Advertisement
Advertisement cookies are used to provide visitors with relevant ads and marketing campaigns. These cookies track visitors across websites and collect information to provide customized ads.
Others
Other uncategorized cookies are those that are being analyzed and have not been classified into a category as yet.
SAVE & ACCEPT
MENU